Survival of the Peachiest

Many growers this year lost their peach crops due to the early spring cold snap. Fortunately, our farm partner, Mr. Johnson has peaches in abundance! Thanks to our partnership with Mr. Johnson over the past four years, we are some of the lucky North Carolinians who get to enjoy local peaches. 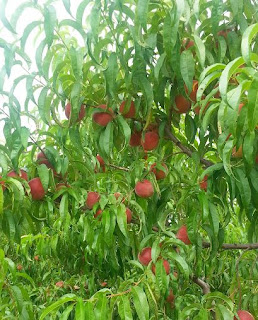 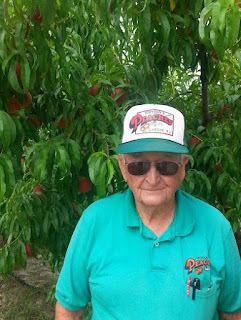 The Johnson family farm was founded in 1934 in Candor, NC (Montgomery County). Mr. Johnson has seen a bit of change during his farming years. As a child, he rode the mule-driven wagon; today, the farm has an irrigation system and a website. Originally, the farm produced tobacco, cotton and a few peach varieties, and the season only lasted about four or five weeks. Over time, the Johnsons realized that changing times required a changing farm, so they grew less cotton and tobacco, and the primary crop became peaches. 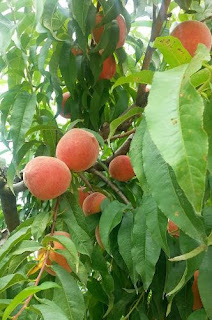 Mr. Johnson, now 83, tends to 50 acres of orchards, filled with 10,000 peach trees of 50 different varieties. That once short four to five week harvest season has grown to about four to five months, late May until October. The farm is family-owned and operated, run by Mr. and Mrs. Johnson. Mr. Johnson and his field workers tend to the trees, which are harvested by hand while standing on 4-foot ladders picking the fruit off the 8-foot trees. Peach trees don’t offer much shade, so it’s hard work!
Do the Johnsons get time off? Not really. The winter is when they set new plantings, pull out old plantings and make repairs to the irrigation system. Mr. Johnson jokes that nature sometimes “freezes” his paycheck. Warm early spring days can fool the trees into flowering early. Then, if a freeze hits in late April, the trees lose the flowers and suffer damage, which is what happened to so many this year. Despite the late freezes, long hours and hard work, Mr. Johnson says he has a good life. He and Mrs. Johnson have been married 58 years, and “it’s been a good pairing and a good life on the farm.” He is grateful to be able to produce peaches for such a long time!

Next time you take a bit of the juicy peaches in your Produce Box, say a thank you to Mr. and Mrs. Johnson.