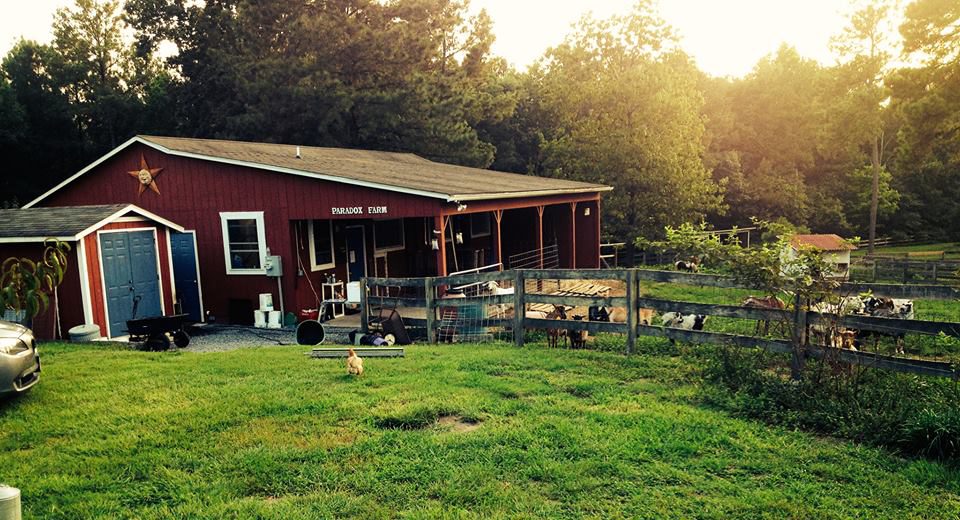 Paradox Farm Creamery began its journey in 2008 when Sue and Hunter bought a few goats and a llama.

Why? Well a few reasons; they became interested in producing their own food for health and food security. The local food movement was hitting the area and.. yes.. they had too much wine one night and decided to buy livestock. The first goats, Thelma and Louise, were selected along with the third goat named Sarah and a llama they called Barry.

Both Sue and Hunter… ok, more Sue.. have the tendency to plow ahead into something and lift her head up later. Well, it was head down until they found themselves eating dinner at Ashten’s Restaurant one evening in 2011 with their signature “Cheese Louise!” on the menu. 2014 brought the unexpected and heartbreaking loss of Hunter. Knowing Hunter had her back, Sue put her head down and pushed forward. 2016 saw the addition of cow’s milk cheese with the purchase of local cow’s milk. Cheese curds became a popular choice for our loyal customers. The farm continued to grow with aged cheese, farm events, cheese pairings with our local beverage producers and even goat yoga!. We gained Animal Welfare Status, the only in the county, and invited cuddlers out to the farm to help us socialize our kids raised by the does!

Then 2020 hit… all of us. Grateful for the healthy resolve of our farm crew, we were still impacted by the economic changes the pandemic created. After considerable soul searching and professional guidance, Sue decided to outsource the herd to a local farm that focused solely on goat milk production and focus her attention on cheese production. If you know Sue well, you have probably heard her adages: “Forward, Never Straight” and “In the world of floaters and sinkers… I’m a floater”.

Fall 2020 saw the addition of partner Robbie Spivey in to the Paradox family. Together they are also embarking with a new venture called Wooly Bully Sheep Ranch. Hold on to your boot strap! There is still no moss on this rolling stone!