When you bite into the juicy red tomatoes in your Boxes this spring, we want you to know exactly where they came from. Meet LL Urban Farms! This is definitely not your typical farm. You won’t find any expansive cornfields here. The farm is a series of hydroponic greenhouses!

Hydroponic growing is a way of planting things in a growing medium other than soil such as rocks or nutrient solutions, as well as in water; studies have shown that this type of growing results in faster growing, healthier plants because the roots do not have to search through soil in order to get the nutrients they need. 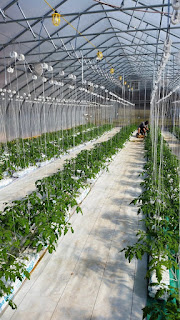 LL Urban Farms uses a “coconut coir” farming method to grow delicious tomatoes. Coconut coir is a growing technique that uses the outside husk fibers of coconuts. Yes, we did say coconuts, ya’ll! The coconut coir is reusable, completely compostable and great for growing in greenhouses because it retains water well. In this method, the coconut fibers are the soil replacement in the hydroponic farming and the tomatoes are better able to absorb nutrients because of it. How cool is that?!
LL Urban Farms also uses a “split stalk” technique with their tomato plants to be able to grow more tomatoes in a smaller space. The stalks are carefully split to allow the plant to grow branches off of both stalks, resulting in larger, higher-yielding tomato plants – this ensures the Produce Box members will have plenty of the fresh, local tomatoes we love.
The story of how LL Urban Farms came to be is just as unique as the farm itself. The farm started by the friendship of two families, the Loys and the Langs. The Loy and Lang children became friends at Athens Drive High School in the Triangle 11 years ago, and in 2013 Dustin and Taylor, two of the children, were married, bringing the two families even closer. 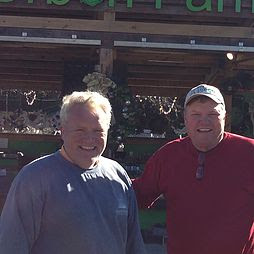 The idea for LL Urban Farms came in 2012 when Jim Loy and Glenn Lang started talking about concepts for an urban sustainable farm that would be able to grow lettuce throughout the entire year. They brainstormed together and built a greenhouse on Holly Springs Road in Raleigh, and LL Urban Farms was born!

Lettuce however, was only the beginning, and they now grow an assortment of veggies in their greenhouses, as well as a variety of local foods (including 20 heritage breed chickens and two beehives!).

We love working with Jim & Glenn and can’t wait for you to taste the delicious tomatoes from LL Urban Farms this week. Be on the lookout for them in your Boxes!